Everyone wants to protect his or her PC from all types of viruses, malware, rootkits and all the other threats and for that they use Antivirus. Antivirus is software that detects and protects PC from all possible types of threats.

AV-Test.org is Independent German security suite evaluators. They check the efficacy and effectiveness of antivirus software and then prepare the list which one is good and which is the best. They perform this test independently.

AV-Test.org performs this test once in two months and then they publish their reports accordingly.

After Windows 8 launches this is their first report for the month of September and October in which they tested 24 suites. 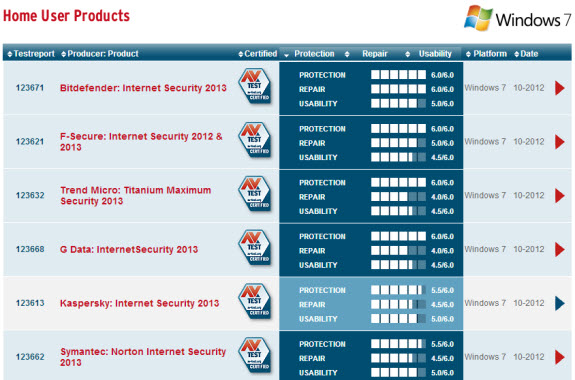 The Antivirus which stood at the first position which was able to protect the PC from all types of threat easily and quickly was Bitdefender Internet Security 2013. Bitdefender secure 6 out of 6 in both protection and repair function and 5 out of 6 in usability.

All these above listed top 5 Antivirus are paid Anti viruses.

There is free Antivirus also which can also protects your PC from threats. The best free Ant viruses are Avast and AVG Free. Both of these have the features that detect and protect your PC.

Out of 24 Antivirus suites that were tested only one failed and that was Microsoft Security Essentials. Microsoft failed in the blocking the malware from entering your PC. Most of the virus that enters our PC is through downloading and e-mails only which MSE is not able to stop.