Another Google Chrome stable channel is available now you can download Google Chrome 17 with new features and security bug fixed. The latest Chrome version is 17.0.963.79.

The latest Google Chrome 17 comes with some improvement like New Extensions APIs, Updated Omnibox Prerendering, Download Scanning Protection and some other small changes.

In Google Chrome 17 omnibox feature is improved, as you start typing in the omnibox it shows URL autocompletes which you are more likely to visit; Chrome will prerender the page so it appears faster and allow you to land on the page instantly. 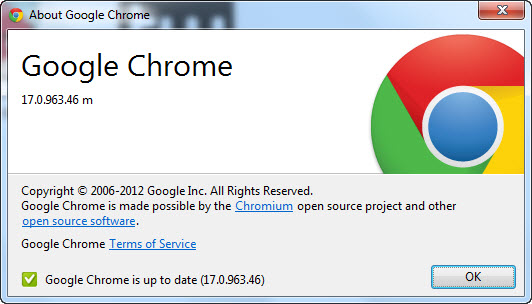 Google Chrome 17 comes with security improvements which protect you from malicious downloads. Google Chrome 17 checks a list of known bad files and checks executable files (like “.exe” and “.msi” files). If executable files do not match whitelist, Chrome will check that file with Google for more information like website you are accessing host many malicious downloads.

Apart from these improvements many bugs are fixed which are listed below.

There is another update for Google Chrome 17 and it’s now updated to version 17.0.963.65 with some bug fixes. This Google Chrome 17 stable release is available for Windows, Mac, Linux and Chrome Freame.