Little time back I was reading that Firefox will slowdown its new release but it’s not look true because Firefox 9 beta is available to download.

Google introduce a new version of Chrome about every month its look Firefox is doing same thing. All the latest release doesn’t have much change in user experience and sometime it is very difficult for common user to figure out changes. Most of the changes are internal improvements, bug fixes and new web standard support.

According to Mozilla Firefox 9 will comes with enhanced JavaScript performance and new developer tools which will make browsing the Web much faster. 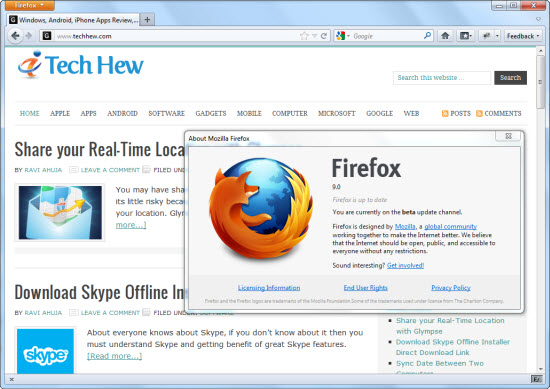 In Firefox 9 beta the new Type Inference is featured in the SpiderMonkey Javascript engine which is the major reason to boost in performance. This helps to generation of more efficient code and Type Inference which improves Firefox 9 speeds.

The final release of Firefox 9 is expected on December 20. Meanwhile you can download Firefox 9 beta from direct link below.