Ever since the introduction of the mobile phones in the market, the intriguing games introduced on them have increasingly become an integral part of the mobile environment and the craze has grown so much so that nowadays manufacturers compete by producing the best phone by hardware which promises to give better processing edge over its opponents.

Mobile games have used for long to kill ample amount of time, amuse the kids and to entertain the user himself! Every once in a while in this mobile gaming industry there comes out a title which creates a huge attraction among the community. The same took place with the game called “snake” which was played on almost every Nokia phone of its era. And we see the recent times; “Angry birds” has swept away people eyes and has almost earned the title of the best android game.

There are a lot of contenders and challengers which have always been around and only a few a really able to dominate and take over. Such a contender though hard to come by, has arrived. “Where’s My Water?” is a fantastic time killing game available on both iOS (Apple) and Android platform. Featuring a friendly alligator named Swampy who unlike the rest of his kind likes to stay clean and adapts to human life pretty easily. Now, as already said, Swampy is an abnormal alligator who has weird qualities. Observing this, “Cranky” is an antagonist alligator who along with his crew try to stop the water supply to Swampy’s house. Well, if you have not figured it out yet, your job is to stop these villains and resupply water to Swampy’s house. 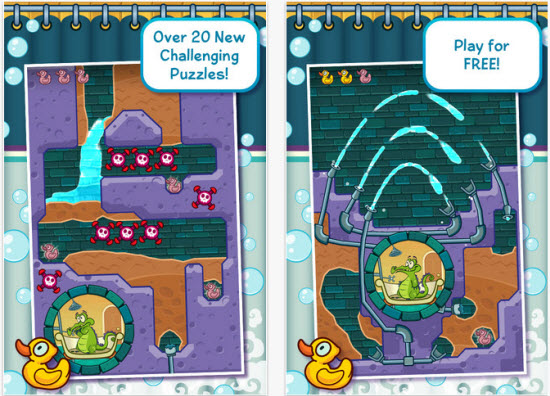 Where’s My Water game seems quite simple where you have to simply guide the water through the ground and into Swampy’s bathtub. But there are many obstacles which one has to take care of. Like there is the toxic waste in the ground which mutates into the clean water if it comes in contact. And almost as similar to angry birds, the user has the ability to collect three ducks along the way to the bathtub so that swampy can play with.

In each level of Where’s My Water game you’ll have a source of water, a pool, a pipe or maybe just a tap. Get enough water to the bathtub and you cross the level. The design of the levels and the cartoon styling are the main attractions of the game. The best thing a user realizes while playing the where’s my water is that the difficulty of the levels is precisely set, so that they may be crossed with a bit of trial and error without frustration.

With seven chapters and twenty levels in each of them, this one is a definite 5/5 on the Android Market. So if you are looking for a game to kill time and have loads of fun in the process, Where’s My Water is a must download for you.