Antivirus is the most common software found in everyone’s PC. Because of the fast emerging threats and new generating viruses the installation of antivirus software has become mandatory. These antivirus suites are capable of detecting those viruses and other threats which may be harmful for the system and protects your system from getting affected. There are numerous companies which develop the antivirus software to serve your PC but selecting which one to buy often becomes confusing. This time we are reviewing Trend Micro Titanium Maximum Security 2012 to let you about its pros and cons.

Trend Micro the Japanese company providing computer security from many years, this year came up with Trend Micro Titanium 2012, a changed name and much improvised and of course upgraded version to give the robust competition to the other challengers in the market worldwide. You need to pay $79.95 and you get 1 year subscription and three licenses. The new version is light weighted with some improvements and changes which are being discussed below. The new edition includes the feature of detection of fake antivirus and stopping of botnets. But at the same time performance of the software will be categorized under moderate because of slow rate of malware detection and phishing protection. 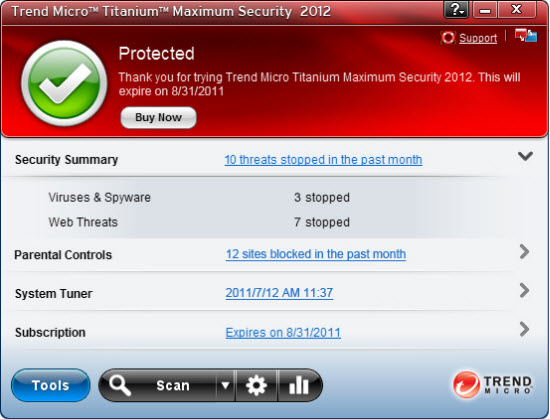 Interface: The main window didn’t show a great change like other antiviruses which got their makeovers. The company’s policy of simplicity still prevails so its interface remains as simple as it was with some minor changes like customization of the product by selecting a skin or using one of your own photos. While keeping the rest same the top quarter is taken up by a large icon and bar declaring your security status, and below it is your security summary and a registration status indicator. The product also gets quickly installed with good interactive wizard.

The big new feature of the Trend Micro Titanium is, like Google Chrome, it also institutes automatic updates, thus removing the necessity of updating your virus definition files many times.

Along with antivirus, anti-malware, and malicious link protection, Titanium AntiVirus Plus protects your installed applications from being altered without your permission, optimizes the Windows firewall, and provides spam guards.

Now the new version of Trend Micro Titanium also adds two new functionalities, firstly it is now capable of detecting and removing the “fake antivirus” type of malware, also known as ransomware, as like in Bitdefender and Kespersky. Secondly it stops botnets that might have infected your computer.

Trend Micro Titanium comes with a toolbar that autoinstalls in Firefox and Internet Explorer. But it is facing some issues with Chrome by ignoring it.

The Vault offers password protection to secure folder that can safeguard your sensitive files. If your computer is lost or stolen, you can remotely lock this vault to keep these files safe. 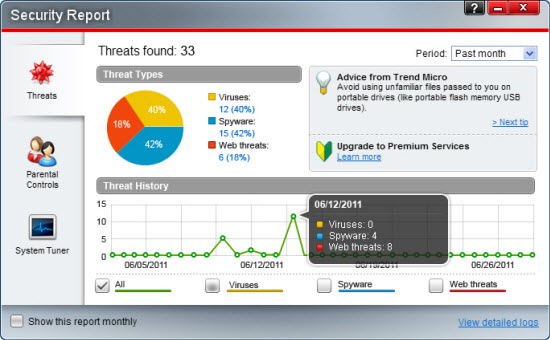 Trend Micro Titanium Security no doubt has augmented from its last year’s version in terms of detection system but still needs to endeavor hard to reach the top. But 2012 sees a solid upgrade in full scanning the system and least effect on the shutdown times but booting still takes some extra seconds as compared to other 2012 antiviruses. The Quick Scan takes up approximately little less than 5 minutes while the Full Scan takes 2 hours and 11 minutes to complete which is unusual than expected as it took less time for full scan in last year’s version.

Trend Micro Titanium has been effective over the past year, but not remarkably so. However, it still needs to improve on fields like malware removal, booting time and prevention and detection of threats.

Overall, the suite’s backup, autoupdate and file sync features are both powerful and flexible, vastly better than the average suite and its antispam is also great but the deficiencies in certain areas needs to be improved to make it a top choice of everyone.