If you are already running late and encounter huge traffic jam right in front of you that time we all just to fly over from this traffic we all this could not be possible but one thing can be done just open the Google Maps in your Smartphone check which route is less populated and take the right turn from there. 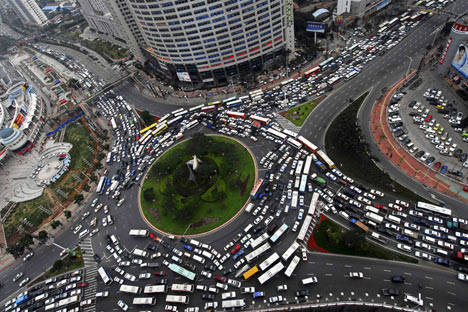 Earlier this week, Google announced a new addition to Google Maps with the ability to see the estimated time of your trip, based on real-time traffic conditions. The data will show up when you search for directions, and Google Maps will show how long several different routes will take with no traffic, as well as the estimated amount of time it will take based on the current traffic. While estimated traffic time had been a feature on Google Maps for years, Google hasn’t been able to provide real-time traffic updates until this week. Google remove the general traffic time estimation from Google maps because of inaccuracy of data now Google introduce real-time updates compile information on traffic speeds as well as road conditions to provide the estimate.

In new Google Maps application user can see the live traffic condition on “in current traffic” real-time figure on the left side of the page in the same spot where the general time estimate used to appear. Google is relying on croudsourcing through Android-powered phones. Croudsourcing is term which means that the application will be fetching the data from the same peer using the same application. The location data will be fetch from the Google maps app from Smartphones which helps Google to read the traffic passing speed of the certain areas that enables them to tell you the fastest route on real time bases. Ex The refreshed traffic data comes from Android users who have opted to use the My Location feature on Google Maps for mobile.

While real-time traffic estimations are currently more commonly found in large metropolitan areas, Android phone users can help contribute to the data by turning on the My Location feature on Google Maps for Android. This data has been anonymized to protect the identities of the Android phone owners. This data fetching process is very similar to the Waze application for iPhone, Android, Blackberry and Nokia phones. Using community, crowdsourced data, and the app provides current traffic conditions after compiling data regarding hazards in the road, traffic jams and reports of police scanning the speed of traffic.