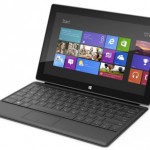 Microsoft the largest software manufacturer of the world is also well known for its world class hardware products. Besides Windows operating system that runs over 90% of world’s personal computers, Microsoft is also known for Xbox 360 consoles and other sorts of hardware devices. And now Microsoft has eyed to further strengthen its base in the hardware arena with the release of its newest and powerful tablet, the Microsoft Surface Pro. END_OF_DOCUMENT_TOKEN_TO_BE_REPLACED