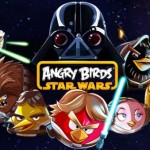 Like the previous version of Angry Bird, this version will also keep you engage for hours. There is always a story created by Rovio to present the game the story with Angry Birds Star Wars. END_OF_DOCUMENT_TOKEN_TO_BE_REPLACED