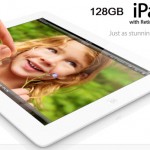 Apple’s fourth-generation iPad tablet is already a hit throughout the world with Apple selling over 120 million iPads across the globe. And now, Apple has announced the upgraded version of iPad tablet in the form of 128GB fourth-generation iPad. Yes, Apple has launched 128GB iPad Tablet. The new iPad model has twice the internal storage capacity than its predecessor increasing its internal storage from 64GB to 128GB. END_OF_DOCUMENT_TOKEN_TO_BE_REPLACED