Mozilla Firefox the second most popular web browser across the world after internet explorer released its new stable version 7.0 on 27th September 2011. Still having more than 25% of worldwide usage share of web browsers Mozilla Firefox is endeavoring hard to give tough competition to Google chrome. This time Firefox came up with some drastic changes including the up to 50% reduction in memory usage.

Only having small improvements in version 5 and version 6 this Firefox came up with some major changes to serve you the best. After Firefox 4 this version can be considered as a major update from their side. 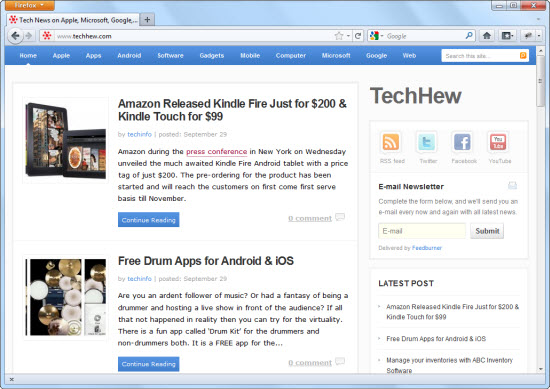 The latest version of the open source Firefox from Mozilla Application suite improves a lot in terms of memory handling. Firefox 7 uses less memory than Firefox 6 often 20% to 30% less or even 50% less if compared to version 4 and frees up more memory when you close many tabs. The performance speed has been improved a lot with faster start-up times, rapid graphics rendering and improved page load speed. The probability of crashing has also been reduced and the browser will continue to work even if one of the plug-in gets crashed.

The main interface is quite similar from what’s come before with some minor changes. Similar to Google Chrome, the “http://” URL prefix is now hidden by default. With Firefox Sync, any bookmark or password changes will be synced immediately and it will take only 5 seconds to start up depending upon the O.S. There is also a new rendering backend to speed up Canvas operations on Windows systems and support for text-overflow: ellipsis and for the Web Timing specification. WebSocket protocol has also been updated from version 7 to version 8 and there are also some changes in security issues.

Overall, Mozilla Firefox will surely attract its ideal users and the improvements in the speeds and performance will further adds up its strength.