Firefox 16 is finally out. Yes, Mozilla has come out with the latest version of Firefox. Mozilla Firefox 16 has been launched which carries many useful changes and updates than its previous predecessor.

The new and upgraded Firefox 16 comes with more HTML5 support and provides the web developers with a unique command line tool. But this is not the end of it as Firefox 16 has introduced a Reader Mode for the Android platform too and has included many other new features as well. 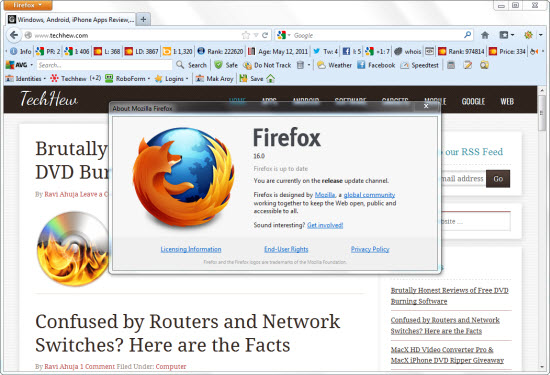 It’s good to see Mozilla introduce big changes in Firefox 16 for Web Developers. You also get to a lot of HTML 5 code being “unprefixed” which invariably means that Mozilla believes that it can run the browser without causing any sort of instability. With Firefox 16, Mozilla has taken the “future-Web” technology route with the inclusion of CSS3 Animations, Transitions, Transforms, Image Values, IndexedDB, Values and Units. Also you get to have Web APIs, Battery API and Vibration API being unprefixed.

All these changes would definitely help Mozilla Firefox 16 to take on the competition with the other browsers of the likes of IE, Google Chrome, etc.

Firefox 16 new command line tool is also a fantastic addition to its varied list of useful and advanced features. Firefox 16 Developer Command Line Tool works to create easy keyboard controls for its developer tools. The Developer Command Line Tool is intuitive in the sense that it completes parameters and commands for you and thus makes Web development more accessible for you.

The Firefox 16 Android version has included a Reader Mode to provide you with a better reading experience of articles and also you can share them easily. The Reader Mode would reformat the blog post making its font bigger, changing the size of pictures and also removes ads, if any.

Some of Mozilla Firefox 16 other new and interesting features includes preliminary VoiceOver support on Mac OS X, web app support for Windows, Mac and Linux users and includes Acholi and Kazakh localizations too.

All in all Mozilla Firefox 16 would bring in a whole new experience in browsing for the internet users of the world.