Google Nexus 7 is the latest entry in budget tablet by Google. This tablet comes with latest Android 4.1 “Jelly Bean” OS. This is the best answer for those consumers who ask “Which budget tablet will be best for me” due to advance Android OS, good hardware and affordable prices ($199 for 8GB, $249 for 16GB) Google Nexus 7 can sure make lot of buzz.

As name suggest Google Nexus 7 comes with 7 inches screen with 1280-by-800 high resolution display. It has a powerful Quad-Core Tegra 3 processor and 1GB RAM. This device comes with 1.2 megapixel front camera. Its size is very comfortable to carry that is 198.5*120*10.45mm with light weight of 340 grams.

Google Nexus 7 is answer to budget Android tablets like Amazon Kindle Fire. Nexus 7 main feature is it latest Android OS 4.1 “Jelly Bean” which is not available in current budget tablets. 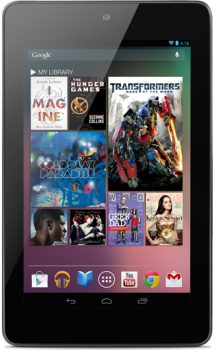 Nexus 7 has all best Google apps- such as Gmail, Chrome, Google+, & YouTube. These are the favorite apps which you can hold in your hand soon. This tablet will provide a clear sound, camera, video chatting. Nexus 7 has been designed as iPod tablet.

The Google Nexus 7 tablet is powered with Li-ion 4325mAh battery. It offers video playback of 8 hours and 300 hours of standby.
Nexus 7 has also some drawbacks regarding storage capacity; it has not supported any other external storage option. Nexus 7 is available in only two storage option 8GB and 16GB.

Nexus 7 is ready to give good completion to other tablets in market but when people have so many choices in Android tables then why they will buy Google Nexus 7. The answer can be it is product by Google with good hardware, latest Android OS and very cost effective 7” tablet in market.