The buzz of launching of windows 8 is over as Microsoft came up with the official release of the developer preview version of Windows 8 during the BUILD developer conference. This is the pre- beta version of windows 8 and it detailed developer tools essential to write applications for the Windows OS family. Thus, it is still not safe to run on production system.

Windows 8 Developer Preview is available in ISO format for 32-bit and 64-bit OS. Microsoft assured that the latest OS will be backward compatible with Windows 7 applications, i.e. Windows 8 provides an option to switch back to the classic Windows 7 mode at any point and the main highlights of this iteration will be, it is the first touch-friendly OS to focus on tablets and has the Metro UI, which was previously seen on Windows Phone 7. Besides that, the complete boot up time of the OS will be less than 10 seconds which will be quite surprising. 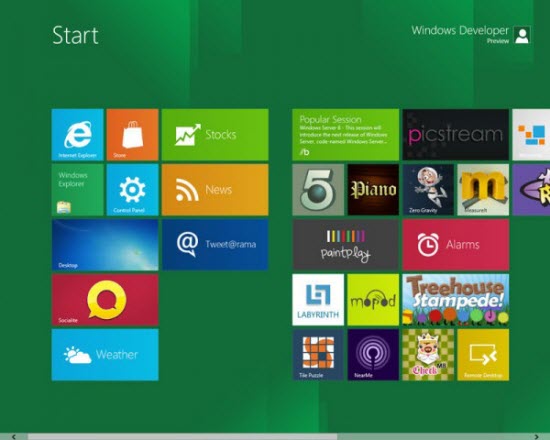 The latest OS also introduces the Windows Store same like as App Store which makes its desktop debut with this build. A single version of Windows will be compatible for both desktops and tablets and for the first time, it will also support ARM-based chipsets.

3 versions of downloads are currently available officially from Microsoft on MSDN. If you decide to install Windows 8 Developer Preview, do read the Windows Developer Preview guide. Download Windows 8 developer preview from direct download link below: