After the launch of Amazon Kindle Fire tablet people where waiting for Barnes & Noble Tablet and they have finally launched their 7-inch Nook Tablet. 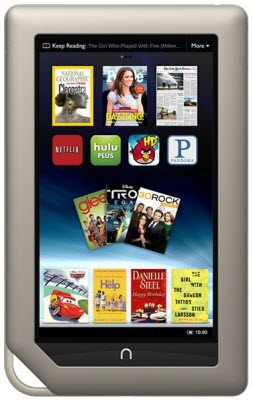 Barnes & Noble Nook Tablet allows you to play full 1080p HD videos; it comes with preloaded apps like Netflix, Hulu Plus, Pandora internet radio etc, Wi-Fi connectivity. Apart from this Barnes & Noble already have 2.5 million books in there shelf so there will be no problem for book lovers comparing to Amazon. Nook tablet weights only 14.1 ounces and is 0.48 inch thick making it light weight tablet.

Tablet users always complain about battery backup keep this in mind B&N promises at least 11 hours of battery backup for Nook Tablet. Nook tablet is prices at $249 and will be available in stores at the beginning of next week.

After the launch of Nook Tablet B&N has dropped the price of Nook color to $199 and Nook Simple Touch price is drop from $139 to $99.