Recently Apple reveled 22nd generation iPad 2 and made lot of changes which make it much better then before. Apple is not the only player who create tablet PC now they are getting competition from other player like Samsung with Galaxy Tab.

Samsung is selling it tablet Galaxy Tab 7” but they recently introduced Galaxy Tab 10.1 which can be the biggest competitor for Apple iPad 2. As Apple runs on its own OS platform iOS 4.3 but Samsung Galaxy Tab 10.1 will use Google Android 3.0/Honeycomb the latest Android OS build specially for tablet PC.

Samsung Galaxy Tab 10.1 is expected to be available by March and Apple iPad 2 will be available from March 11 in U.S. Right now it is difficult to predict who will win the race of tablet PC but so far Apple is the leader in Tab. The problem with Apple is that there presence in Worldwide market is not as good as Samsung. In many World market Apple iPad is not yet release or released one month before.

Have a look at the product comparison between Apple iPad 2 and Samsung Galaxy Tab 10.1. 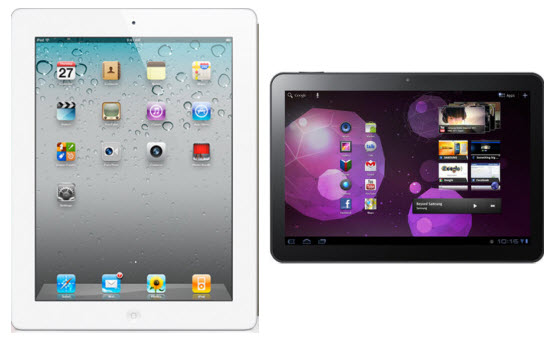 It is totally individual’s choice which device they like. Decide what you will choose iPad 2 or Samsung Galaxy Tab 10.1. Only time will tell which is great device but it is sure iPad has changed they way of computing.