So you have bought yourself a flashy new iPad and are experimenting and getting to know all that the new device is capable of. Well to start of first, except for the functionality of reading books, browsing, and using office applications the iPad is known for its amazing screen which makes video and movie watching an amazing experience.

You no longer have to stick to the 3-4 inch sub-quality screens, rather on the iPad you have raw 10 inches High definition screen backed up by a dual-core A5 processor which enables you to watch 1080p video’s flawlessly and be assured it will give you a mind blowing experience.

As they say that, when things are too good to be true, it is often because they are. Hence, there is a big problem with the iPad. Even though you are able to play high quality videos on the iPad, the device only recognizes only some types on video which are in a particular format. And if you are connected with a windows platform, overcoming this problem can be a hassle. Unlike other tablets out in the market which run Android operating system where users can directly transfer videos into the device for playback; the same process does not imply for the iPad as all the videos have to be put in through the iTunes and need to be in one of the right formats which the device recognizes.

Aiseesoft iPad Video Converter takes care of all the problems. Created for Mac and Windows users, it is a professional iPad video convertor and had several other functionalities also. It can also convert videos to the iPad, iPad2, iPod classic, iPod shuffle, and iPhone to MPEG-4, H.264/MPEG-4 AVC, AAC, MP3, WAV video and audio formats. 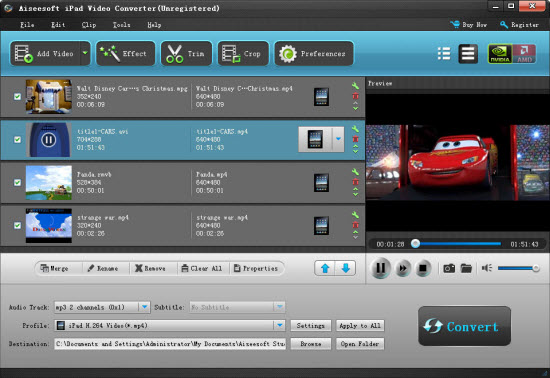 With the powerful conversion function, Aiseesoft iPad Video Converter converts almost all the popular video and audio formats such as MPG, MPEG, VOB, MP4, MKV, TS, MPV, AVI, 3GP, MOD, TOD and HD video to iPad supported video format. Not only this but you also have some pretty powerful editing functions which might come in real handy, like trimming the video clips and cropping a video frame. With Aiseesoft iPad Video Converter you can even add a customized water mark of your own while converting and merge two different files to create a single video as well.

Aiseesoft iPad Video Converter also offers some other features for more advanced users where you can pretty much tweak everything you want in a video for the iPad. One can adjust the output video Encoder, resolution, frame rate and other features. Adding the subtitles and a preferred audio track and effects to the video can easily be performed and are a child’s play.