As most of the Microsoft Windows applications developments are based on .NET Framework it has now become very essential to install .NET Framework on our personal computers. The latest .NET Framework 4 was released on April 12, 2010, alongside Visual Studio 2010.
The .NET Framework is basically a software framework that runs primarily on Microsoft Windows. It contains a large library and supports several programming languages which allow language interoperability and the .NET library is available to all the programming languages that .NET supports. This base Class Library provides user interface, data access, database connectivity, cryptography, web application development, numeric algorithms, and network communications. 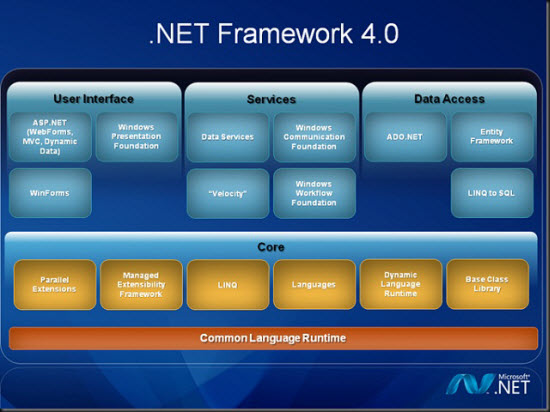 Programs which are written for the .NET Framework execute in a software environment known as the Common Language Runtime (CLR), an application virtual machine that provides important services such as security, memory management, and exception handling. The class library and the CLR together constitute the .NET Framework.

Programmers combine their own source code with the .NET Framework and other libraries to develop their softwares and nowadays most of the new applications are developed using .NET framework.

The new features of .NET 4 Framework include:

Microsoft provides .NET Framework installer as a free download available to everyone. But as it is an online installer, it means that you need an uninterrupted internet connection to download the framework. Firstly a small piece of installer gets downloaded and upon initiating the installation process the installer automatically connects to Microsoft servers and downloads the required components.

But suppose if you have number of systems in your office or working place and if you wish to install it in every computer then you need to spend a lot of your bandwidth and need to download it in every system. The remedy for that is to download the offline installer in one system and transfer it to all your systems whenever you like and that too without any internet connection.

Thus to save your time and bandwidth we are providing you the offline installer links of .NET framework 4 for the desktop with direct download link.