These days pretty much everyone is a videographer. No longer does capturing a great moment on video require you to think ahead and lug around a camcorder. Now you can whip out your point-and-shoot digital camera or smartphone to shoot HD-quality video, whether it’s a great scene from your vacation or your friend’s latest skateboard trick.

Unfortunately, much of the footage we take bare the marks of hastily shot amateur video: nausea-inducing shakiness, bad lighting, and worse audio. And most damning, the video is usually boring after the first few seconds. This is a problem that’s easily solved. Below are five basic tips that can help make your videos look more polished, and more interesting for your audience. Who knows maybe you’ll even be able to create a project that will become a free movie you share online for millions of people to watch. 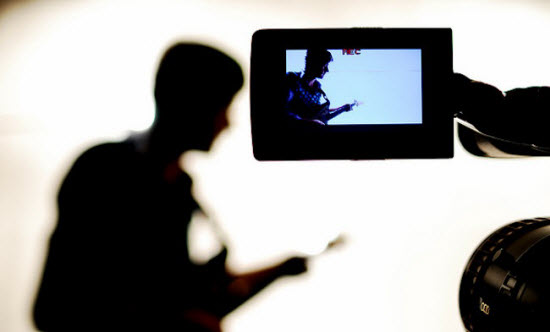 1. Minimize shakiness. There’s no bigger immediate turnoff than the constant shaking that plagues so much homemade video. Video cameras — especially on smartphones — are very sensitive to hand movements (that’s why the Steadicam was invented). The best way to eliminate shakiness is to use a tripod, especially if you’re trying to track moving objects or pan over a wide area. If you don’t have a tripod, find a sturdy surface to place your camera, like a concrete ledge. If that’s not available, leaning your body against a wall will help reduce your movement. If all else fails, sit on the ground and prop up your elbows on your knees — this will help stabilize your hands.

2. Bring the light, cut the noise. Unlike taking still photographs, your options for compensating for low-light conditions when shooting video are limited. Shoot outdoors during the day for the best results. If you’re inside, turn on as many lights as possible, especially overhead lights. Also avoid backlighting, which will produce a halo effect on your subject and black out their features. If you’re trying to capture bright lights in a night sky check out these video tips for shooting fireworks.

As for audio, your camera’s internal microphone isn’t particularly good at distinguishing between voices and background noise. If you’re trying to capture people talking, use an external mic — a clip-on mic for interviews, or a shotgun mic if for basic shooting. Failing that, shoot in an area with as little background noise as possible. Typically, that means indoors. Internal mics are very sensitive to wind, and even ordinary wind sounds can drown out the main audio you’re trying to capture. Also, get as close to your subject as possible without ruining the shot.

3. Think before you shoot. You don’t have to storyboard each shot as if you were Alfred Hitchcock, but you should try to frame your video shots just as you would a photograph. Keep the main subject out of the center of the frame by using the rule of thirds. Avoid taking too many wide shots — that quickly becomes tedious to watch. Also, unless you plan to do a lot of editing later, don’t shoot continuously. A good test for your next shoot: don’t hold any shot longer than 10 seconds (you’ll be surprised how long that is when you’re watching a video). Finally, keep the panning and zooming and filter effects to a minimum. Unless you’re using a tripod, panning and zooming will only exacerbate the shakiness, and those filters may seem cute at first, but they’ll quickly grow tiresome.

Much of what applies to shooting video with a digital camera applies to capturing video with your smartphone, only more so (that is, it’s even more important to shoot in a well-lit, quiet location with a smartphone). But there are a couple of mobile-specific techniques that can help, as well.

4. Go horizontal. It’s natural to hold your smartphone in the vertical position, but that orientation is deadly for videos. Turn your phone to landscape orientation when shooting video (you should do this for many still photos, as well).

5. Get closer. Most likely, you won’t be watching the video you shoot with your smartphone on a 50-inch flatscreen. Make sure you fill the frame with your main subject as much as possible to make the images more compelling on smaller displays.

Most of all, keep shooting. The more video you take, the more these tips and techniques will become second nature. Get familiar with the menus and settings on your camera or phone so you can make necessary adjustments quickly. Once you shoot some video you like, you can always convert the video into different formats so you can watch it on a phone, tablet, PC, or even share it with friends and family on Facebook. Don’t be afraid to make mistakes. Ultimately, that’s how you’ll learn what works and what doesn’t.

About Author: John Moore is a writer for the RealPlayer video blog.